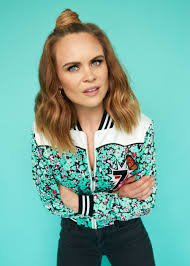 Joanne McNally, Ireland’s fastest rising comedy star, is currently performing her new solo show Wine Tamer across Ireland and the UK and recently sold out her run in the Dublin Festival Fringe. Her documentary, Baby Hater debuted on Irish television earlier this year to fantastic reviews.

She performed her one woman show Bite Me at the Edinburgh Fringe Festival last year. The show was previously performed at the Dublin Fringe Festival where it was nominated for four awards including ‘Best Performance’ and ‘Best Production’.

Joanne has numerous TV credits to her name including The Late Late Show, The Tommy Tiernan Show, The Ray D’Arcy Show, The Seven O’Clock Show, The Afternoon Show, Totes 2014, Panti Does 2015, Ireland AM, Two Tube and The Commute for RTÉ.

She is a regular on the airwaves with a weekly agony aunt slot on 2FM’s The Chris and Ciara Show and also her weekly Mack The Week slot on Rte2fm’s drivetime Eoghan McDermot Show. She has also been heard on RTÉ’s Ryan Tubridy Show, Today FM’s Alison Curtis Show, Spin 1038.com’s Spin Talk, 98FM’s Ray Foley Show and 4FM’s Saturday Show.

She regularly performs in comedy clubs around Ireland as well as at many of the major festivals including Kilkenny Cat Laughs, the Vodafone Comedy Festival, Jestfest, The Bray Comedy Festival, Electric Picnic and Body & Soul.